Due to the chip shortages, prices of computer components have hit their all-time high. Building a gaming PC for under 1000$ is not what it used to be; you need to manage your expectations.

Even with the limited budget, we managed to put together a great build that will run all the latest games. 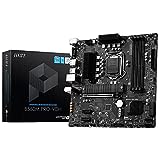 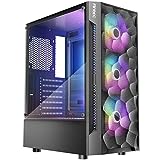 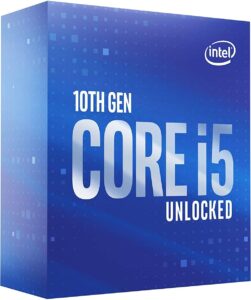 Until recently, the Ryzen lineup was dominating the mid-range segment, as it offered similar performances and higher core count than their Intel counterparts. However, Intel has stepped up its game with its 10th generation of processors. Although this processor is more than capable in multi-thread scenarios, we mainly picked it for its single-thread capabilities.

This chip has 6-cores and 12 threads clocked at 4.2 GHz, reaching up to 4.8 GHz in the boost mode. With such high clock speed, it outperforms the Ryzen 3700X in most games by about 30%, which is a considerable difference. Intel was kind enough to include hyperthreading support, which was until recently a feature reserved only for their higher-end chips.

It is worth noting that the 10600K is a 10900K in disguise. It’s the same chip, but with four cores disabled. This gives it unique thermal properties, as it is made to run a 10-core chip by design. So we are not surprised that most users can hit 5.3 GHz with the included stock cooler. 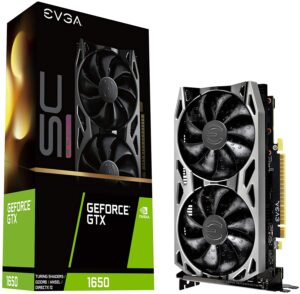 With most cards currently being out of stock, and those available are priced at 2 to 3 times their MSRP, it’s becoming tough to find a gaming GPU for a reasonable price. GTX 1650 SC is one of the best choices for budget builds right now, considering most cards with similar capabilities cost more than 800$. With a TDP of only 100W, this GPU manages to stay pretty cool even under max load.

Super SC Ultra version comes with some considerable upgrades compared to the stock GTX 1650. Memory has improved from GDDR5 to GDDR6, which translates to about 2x higher framerates in most games.

That big performance bump is not all due to the memory, as they managed to increase the CUDA core count from 896 to 1280, which brings it much closer to the more expensive GTX 1660. 4 GB of memory will be plenty for 1080P gaming, but you will need to bump down the texture quality if you got a 1440P monitor. 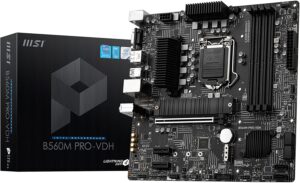 Since we are on a limited budget, we went for an entry-level motherboard, but we still wanted to keep some of the neat premium features foun on more expensive boards. And that’s how our research has brought us to the MSI B560M PRO-VDH.

This black and silver design board will go well along with the gray RAM modules and Antec case that we’ve picked. Its B560 chip is not as capable as the premium Z490, but it will get the job done.

Gen 3.2 support is there, albeit there are only two ports. The sound card is pretty basic, but it does come with an audio boost feature. That means you will be able to use some higher-end headphones which have a higher impedance rating. There is a 2.5 Gbit ethernet port, which allows for much higher transfer speeds compared to the legacy gigabit controller. 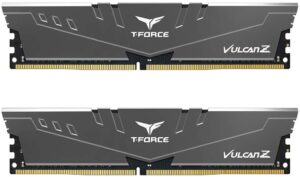 We’ve chosen this 16GB kit, as it offers the best value for your money. Compared to its more expensive competitors, it has higher timing, clocking at 16-16-18-38. But this module has proven to be highly overclockable, thanks to the XMP 2.0 support, so with a bit of luck, you can achieve tighter timings.

16 GB will be plenty for all the latest AA games, and thanks to the affordable price of RAM in recent years, it will be easy to upgrade when the time comes. 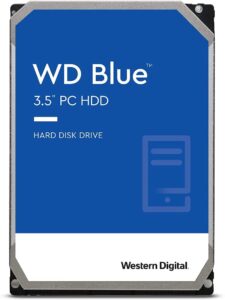 With the increasing popularity of flash memory, many people are surprised when they see a hard drive in a build. We can tell you that hard drives are here to stay, as they offer more storage for your dollar than SSDs, and they are better suited for storing media.

NAND flash is limited by how much it can write and read in its lifetime. But hard drives don’t have this limitation, and their lifecycle is thus much longer. WD Blue is a great choice, and 1TB is more than plenty for all of your media needs.

Lately, there has been an influx of affordable NVMe drivers on the market, so SATA-based M.2 drives are quickly becoming a thing of the past. SN550 is one of the top budget choices, as it offers high speeds, low temperatures, and a great controller for a low price.

Thanks to the NVMe interface, transfer speeds are blazingly fast. This model has a sequential read speed of 2600 MB/s, while the write speeds go up to 1800 MB/s. This is an improvement over the SATA interface, which maxes out at about 900 MB/s write speeds. Since we included a hard drive in this build, a capacity of 500GB will be plenty for the operating system, a few applications, and some games. 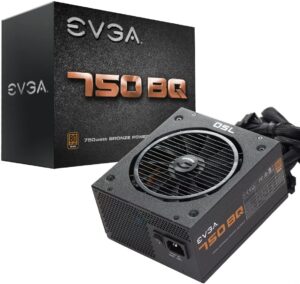 Proper cable management is important if you want to have a good-looking build and proper airflow within your case, and that’s where modular PSU comes in handy. This power supply is cooled by a single 140mm fan, which is surprisingly quiet. 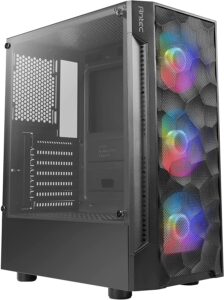 No build is complete without a nice case, and for this build, we picked this stylish black and grey case from Antec. This mid-tower case is the perfect choice as it comes with three pre-installed ARGB 120mm case fans.

The front panel has a mesh cover, which will keep the dust out of your components. This case supports motherboards of all form factors, and there is plenty of space available in this case for upgradability. 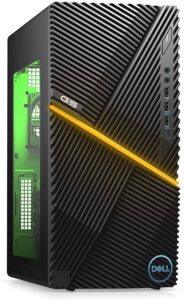 If building a PC seems like a tough task for you, there is always an option to get a prebuilt system. Traditionally, pre-builts are the more expensive option, but since they aren’t susceptible to price changes as components are, they might prove to be a good option in this volatile market.

Dell has a long reputation in the AIO desktop segment, and their computers can be found in most offices around the world.

But they also have some interesting gaming desktops, and G5 is one of them. GTX 1660 Super is the crown of this PC, it outperforms the GTX 1550 SC by about 20%. They’ve chosen the Intel Core i5-10400F for the processor.

This six-core, the 12-thread chip is more than capable of running the latest games, and with a boost frequency of 4.3 GHz, it offers much better single-thread performances compared to the similarly priced Ryzen chips. There is a 1TB hard drive for all of your media needs. There’s also an addition of 256 GB SSD, useful for your OS and some apps and games. 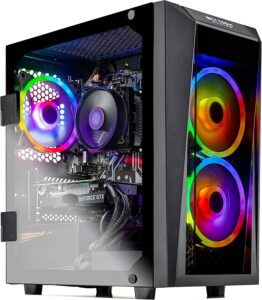 This is another great pick if you are looking for a prebuilt. Skytech is a company that is well known for its prebuilt systems, and Blaze 2 is a great choice for gamers on a budget. Windows 10 Home is pre-installed, so you won’t have to worry about OS installation, you can get straight to gaming. It comes with wireless capabilities, which is rare at this price point.

CPU is more than capable 6-core i5-10400F. As far as GPU is concerned, there is a GTX 1660 Super onboard, but unlike the Dell G5, this one has the 6GB version, which is a big upgrade compared to the 4GB version.

It enables you to play the latest games in 1440P on the highest settings. 500GB of NVM storage is all you got, but it’s always easy to add another storage device in the future. You also get a keyboard and mouse with this computer, which is a nice bonus.

With so many components and peripherals marketed towards gamers, it is difficult for the average user to distinguish which components make the most difference when gaming. Gaming monitors are not a fad, and they are becoming an essential part of every gaming setup.

While you could hook up your new pc to any monitor, or even a TV, you will get a much better experience from a gaming monitor.

First off, they are made for a prolonged amount of use, and their panels are much easier for your eyes. Another important feature of the gaming monitors is the high refresh rate.

Most regular monitors and TVs have a 60Hz refresh rate, which means that panel refreshes itself 60 times a second.

While this may sound like a lot, many fast-paced games show visible tearing on 60Hz, which can be off-putting. High-refresh gaming monitors have fixed this problem, so always go for a panel with a refresh rate of 120Hz or higher.

Building your PC can be a fun way to learn more about computers. It will give you a better understanding of how a computer works, and most importantly, you have complete control over which parts go into your computer. If you are up for a fun challenge and you want to learn something along the way, you should consider building your PC.

There are plenty of tutorials online which will guide you along the way, and we guarantee you it’s easier than you think. But if you want something that runs out of the box, then a prebuilt PC may be more suited for you.

Many processors today support onboard graphics. And while it may be a good way to save some money on your office build, it simply won’t be enough for gaming. Dedicated graphics are only good for most basic tasks, they are powerful enough to support OS animations and modern web pages.

They are good for retro gaming, but that’s about it. Plenty of prebuilt PCs try to get away with onboard GPU, so always make sure the computer you are getting has a graphic card if you

Apart from components, you will need to get an operating system for your gaming pc. While in theory, you could get Linux for free, gaming support is almost non-existent on it, so you will most likely be getting some version of Windows 10.

A nice way to save some money if you are a student is to get Windows Education. It’s completely free, and it has all the features of a regular version.

A few years back, 1000$ was more than plenty to get a high-end gaming PC with a top-of-a-line GPU. But times have changed, and due to chip shortages, component manufacturers can’t keep up with the demand of the market.

Since there is more demand than supply, it introduced some price gouging, and the price of many components is double or triple their MSRP. But 1000$ will still get you a decent gaming pc that will run all the latest games.

Is Intel or AMD better for gaming?

Both companies produce great processors, and both offer legitimate choices, the choice depends on the user. AMD offers better options in the entry-level segment, while Intel is dominating the mid-range segment with its gaming CPUs.

Both companies have similarly priced flagship models, which perform similarly, so it all comes down to personal preference.

Why is AMD cheaper than Intel?

Is it cheaper to get a prebuilt PC?

Yes, prebuilt PCs currently offer a better bang for the buck than custom builds. The reason is simple, companies that make prebuilt rigs buy their parts in bundles directly from the manufacturer, so they are not susceptible to price gouging. But this often comes at a price, as most prebuilt PCs cheap out on PSU and storage options.

This build is more than capable of playing all the latest games at 1080P. You definitely won’t be able to max out your games in 1440P, but prices are only climbing up, so getting a gaming PC right now might not be a bad idea.

The build we made can be upgraded in the future when GPU prices go down a bit. Prebuilt PCs have also become a viable option, as they offer great value for your money.

Check out these also: 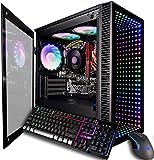 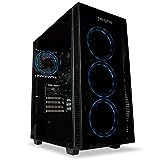